You live in the material universe, which is made from energies that vibrate within a certain spectrum. Your physical senses can detect only the lowest range of this spectrum, namely the matter, or physical, universe. Your conscious mind, conscious self, has the capacity to tune in to and experience higher levels than what can be detected by the senses. Above this physical spectrum is the emotional energies, above that the mental and above that the identity level.

As you go beyond the four levels of the material universe, you reach the lowest level of the spiritual realm. In this realm there is a large number of spiritual Beings. Some of these are the Beings who created the material universe, including planet Earth. A common name for these is Elohim, a plural name for God used in the Old Testament. Some of the spiritual Beings have descended into physical embodiment but have now ascended back to the spiritual realm. When you balance all karma, resolve all false beliefs by putting on the mind of Christ and fulfill your original reason for coming to Earth, you too can become an ascended Being or ascended master. 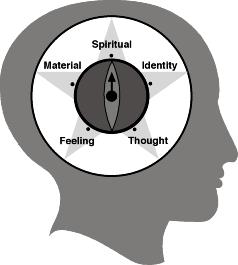 After you ascend, you become a spiritual, or an immortal Being, meaning that you do not have to come back into embodiment on Earth. You then have two options. You can choose to continue your personal growth and rise up through the various levels of the spiritual realm until you reach the very highest level of consciousness, normally called God consciousness. Jesus said, “Ye are Gods” (John 10:34) because you have the potential to reach the full God consciousness. Your second option is to temporarily set aside your own growth and serve to help those on Earth who have not yet ascended. You then become a spiritual teacher for unascended beings. Jesus, Krishna and the Buddha are the most well-known examples of such teachers.

Most religions teach that there is nothing beyond the Creator. However, if that is true then where did the Creator come from? In reality, there is a level beyond the Creator, namely what is called the Allness. The reason this level is unknown to most people is that there are no words, images or even concepts in the material realm that can describe the Allness. In fact, while you are still on Earth, it is not possible for you to fully understand the state of consciousness that exists in the Allness. The reason for this will become clear shortly.

The Beings in the Allness determined that there was value in creating a world in which separation was possible. Thus, an individual being could start out with a very limited sense of identity as a separate being. It could then grow in self-awareness until it reached the consciousness of the Allness. This Being could then enter the Allness with an awareness of what it was like to feel separated from the Allness, thereby having a greater appreciation for the Allness.

The Being who created the world of form in which you live was once one of the Beings in the Allness. This Being volunteered to temporarily set itself aside from the Allness and create – out of its own Being and consciousness – a world that seems to be separate from the Allness. In this world can exist separate forms, forms that do not seem to be expressions of the One God. Also, there can exist separate beings, beings who are not consciously aware that they are expressions of the one God.

These beings can then start out with a limited sense of identity and self-awareness in which they think they are separated from their source, from each other and from the world in which they live. By gradually rising to higher levels of consciousness, they will eventually come to see the oneness of all life. They can then either enter the Allness with full God consciousness or they can become Creators of other worlds of form. Yet until such a being reaches the level of God consciousness, it simply cannot fathom the Allness. Obviously, you are one of the beings who was created with a limited self-awareness but with an infinite potential to expand that self-awareness. That expansion of self-awareness is the essential purpose behind the creation of the world of form. Thus, it is the overall purpose of life.

How did the Creator create the universe?